The laws of physics do not care about which flag waves on what soil, as cranes collapse all over the world – most often the culprit being good old gravity. Today we’ll combine several stories into one and tell you about the most powerful non-self-propelled floating crane in Ukraine, the disaster that ensued, and how it all ended

Here is LK-600 "Zakhary" with a lifting capacity of 680 tons. It was built in 2009 at the Leninskaya Kuznitsa plant in Kiev. Since the crane was designed for river conditions, it has a low settlement tendency and low height during transportation, which allows it to pass through shallow water and under bridges 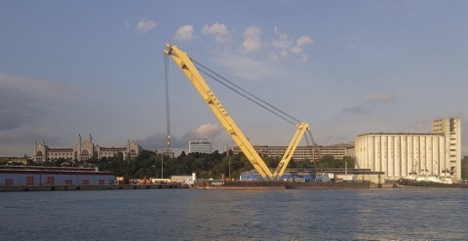 Of course, a powerful crane deserves appropriate work. So, the first task of Zakhary was to load another crane Terex Demag CC2800-1 onto the Roksolana 2 ship. In turn, Demag was the most powerful unit used during the reconstruction of the NSC Olympiyskiy in 2010

Everything went smoothly at first, but in 2011, during the construction of the Podolsky bridge, disaster struck during a crossing. On November 18 at 11:10 a.m., the crane toppled over, creating panic among drivers stuck in their cars during a traffic jam on the embankment 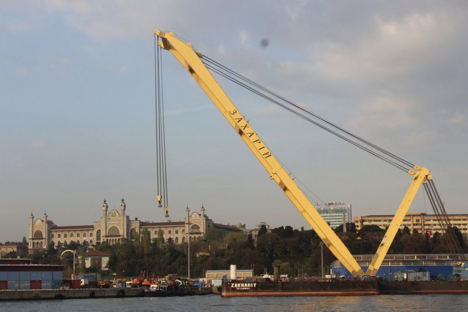 Don’t worry, none of the eight crane crew members were injured with five of them escaping on their own, while three others were saved by the Rescue Service. But some parts of the crane were damaged - a boom fell on the right pontoon, and some fuel leaked from the tanks into the Dnieper

The fault for the accident lie directly with the captain, who, when bringing the crane to the transport state, somehow disconnected the left pontoon, which was providing the necessary stability. In addition, the boom was lowered to an incorrect marching position 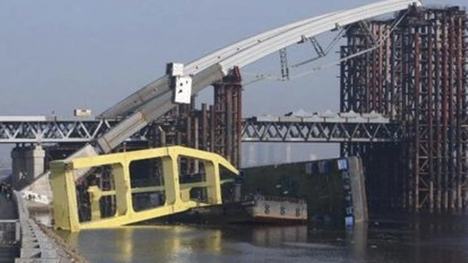 The reconstruction and modernization of the crane ended in 2014 and now the Zakhary is called Lifting Chart LK-800, with the corresponding increase in its lifting capacity to 800 tons. So, on the one hand, the fall was even good for Zakhary, in a way.